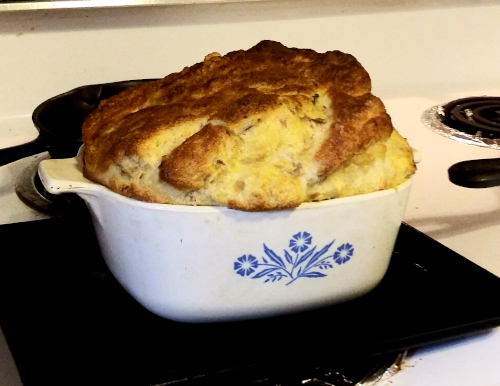 This is based on Craig Claiborne’s recipe for salmon souffle in his New York Times Cookbook, 1961 edition. I frankly prefer tuna to salmon in this recipe. (Claiborne is my favorite cook book writer; I’m working on wearing out my third copy of this book and my copy of his New York Times International Cookbook is held together with library tape.)

1. Melt the butter in a large sauce pan, then blend in the flour, stirring with a whisk. Meanwhile, bring the milk to a boil over high heat. When the milk starts to rise in the saucepan like a piston in a cylinder, pour it quickly in the the butter-flour mixture and stir briskly until the combination thickens into nice white sauce. Set aside. (Note: Timing is critical: add the milk too soon and the sauce will not thicken; wait too long and you’ll have boiling milk all over your stove.)

2. Separate the eggs. The best way to do this is by hand, using three small bowls, one to catch the white as you separate each egg, one each to hold the separated yolks and whites. The reason for using three bowls instead of just two is that, sometimes, the egg will not separate neatly.)

3. Beat four yolks into the white sauce, one at a time. Reserve the other two for Hollandaise sauce.

4. Beat the egg whites until they stand in peaks when you lift the mixer out of them. Be sure to turn the mixer off before performing this test.

5. Gently fold the beaten egg whites into the tuna mixture, then pour into a greased two quart souffle pan or similar container.

The picture is of a tuna souffle that I made this week. H/T Susan for the picture.