And Now, a Musical Interlude 0

Your Military-Industrial Complex at Work 0

In perhaps the worst national-security breach of its kind to hit the Navy since the end of the Cold War, Francis doled out sex and money to a shocking number of people in uniform who fed him classified material about U.S. warship and submarine movements. Some also leaked him confidential contracting information and even files about active law enforcement investigations into his company.

He exploited the intelligence for illicit profit, brazenly ordering his moles to redirect aircraft carriers to ports he controlled in Southeast Asia so he could more easily bilk the Navy for fuel, tugboats, barges, food, water and sewage removal.

Over at least a decade, according to documents filed by prosecutors, Glenn Defense ripped off the Navy with little fear of getting caught because Francis had so thoroughly infiltrated the ranks.

The company forged invoices, falsified quotes and ran kickback schemes. It created ghost subcontractors and fake port authorities to fool the Navy into paying for services it never received.

Francis and his firm have admitted to defrauding the Navy of $35 million, though investigators believe the real amount could be much greater.

Thom and John Kenneth White try to figure out what the hell is going on withe the Republican Party.

The AP’s Paul Newberry calls out the NFL for its strategy of dangling Super Bowls in front of cities to get free stadiums. (Cities seem to be easy marks for the NFL’s con game.) A snippet:

“We found no evidence that local income or local employment were any higher in years when a city hosted a Super Bowl than other years,” he (Brad Humphries, WVU econ professor–ed.) said. “If it was generating the sort of economic impact that people say, I think we would’ve been able to find it.”

Nothing much has changed since then, but cities keep playing the game.

Where’s the ref to throw the flag on illegal use of hand-outs?

What aspiring tyrant Trump instinctively believes (if he believes anything) is that he is the law. And that if a public servant in an independent branch of government dares suggest otherwise, then clearly the system is “rigged,” and any public servant who refuses to bow down should be investigated. (Trump on the stump last Friday: The system “ought to look into Judge Curiel.”)

So, a few questions. Are Trump’s followers so deaf and blind that they truly don’t realize what is happening here? Has their faith in our democratic institutions eroded to the point that they’re happy to feed a junkyard dog who would treat our institutions as his personal chew toy? Are they so ignorant of world history that they can’t see the danger of a leader cult? And can the complicit Republican party sink any lower

Looking to recent history, the answer to Polman’s question in the last sentence is, without question, “Yes.”

“Sinking lower” is what Republicans do. 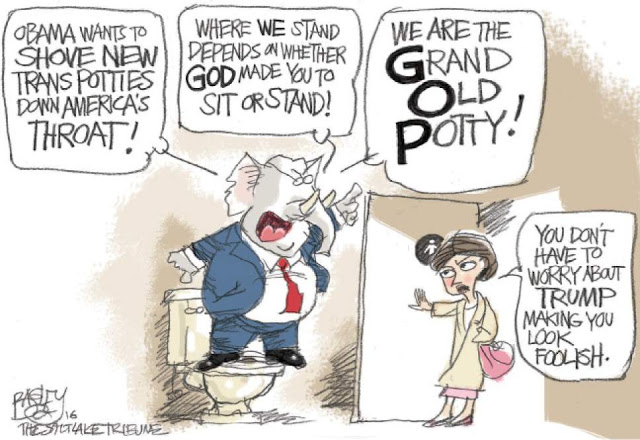 Writing at The Observer, Evgeny Morozov explores self-serving double standards of tech titans who would have you run naked through the internet while, secluded behind high walls with turrets and towers, they watch you cavort.

Here’s just a couple of examples; follow the link for much, much more.

Eric Schmidt, executive chairman of Google’s parent company Alphabet, tells us that if we have something to hide, maybe we shouldn’t be doing it in the first place; he himself prefers to live in a luxury building without a doorman – so that no one can see him come and go. Facebook CEO Mark Zuckerberg wants us to practise openness and radical transparency; he himself purchases neighbouring houses to get as much privacy as possible.

They are digital carrion crows; under cover of providing a “service,” they pluck the bodies of their users and sell them for profit.*

In their world, openness is for others, a commodity to mined and traded.

*As the regards the “services” they provide, I would argue that Google’s search is far more valuable and useful to those who use it–it is an actual “service”–than, say, Facebook’s or Instagram’s nattering nurseries of narcissism.

May 31, 2016 | Posted by: Frank | Posted in: Mammon, Running Naked through the Internet | Bookmark this post

Nothing lulls and inebriates like money; when you have a lot, the world seems a better place than it actually is.

And Now for Something Completely Different 0

Oracle will, no doubt, appeal, because it has more money than God. Google, to its credit, will no doubt continue to fight.

As an aside, I point out that Oracle has no qualms about using other people’s stuff. It markets something called “Oracle Linux” (if I remember correctly, it used to be called “Ironclad Linux”), which is little more than Red Hat Enterprise Linux (commonly referred to as RHEL) repackaged with an extra added price tag. That is quite legal under the terms of the GPL that governs must free and open-source software, but it also highlights Oracle’s self-serving lack of–er–consistency.

One of the parishioners at the church was showing another person the weapon in the kitchen of the Fire and Water International Church at 20th and Diamond streets, Tovar said.

“And what he was doing was clearing the weapon,” he added.

A round inside the chamber discharged and struck the ceramic tile floor.

And another gun that miraculously discharged itself, praise the Lord and pass the ammunition.

I haven’t paid much attention to the Hillary Clinton email scamdal because I knew from the git-go that it was yet another Republican lie in a long parade of lies about the Clintons, a parade reaching back to and beyond the Republican fever dream that the Clintons somehow murdered Vince Foster.

One does not have to be a fan of the Clintons to be disgusted by the Republican lies.

Now Cynthia Dill has sacrificed her time to plough through the bureacratise of the report on Hillary Clinton’s email scamdal so we don’t have to. Her findings come as no surprise. As with an email sent to /dev/null, there’s no there there.

This was no covert operation, for heaven’s sake. It’s not like Clinton was secretly selling arms to Iran and funding the Contras. The Clintons paid out-of-pocket for a few techies to work in their basement keeping this server humming and free from cyber breaches. Staffers from the Bureau of Diplomatic Security inspected the email system, looked at the logs and communicated with these people on a regular basis. The bureau even refused to help fix it when Hurricane Sandy disrupted power “because it was a private server,” according to the report.

Clinton reasonably believed her private server was allowed because the bureaucrats in charge of security allowed it. This present-day conviction for violating rule 12 FAM 544.2 after the fact means nothing of any consequence. Nobody was hurt. No security was breached. Who cares?

I think one reason that this particular scamdal has had some staying power is that, to most persons, an email server–hell, a computer–is a dark magic box, mysterious and alchemical.

You too can have your own email server, if you wish. I know folks who do. It’s a bit complex, but it’s not magic, it’s not alchemy, it’s not voodoo; it’s just a computer program. (If you think government servers are somehow magically more secure than other servers, think again. Governments don’t do security better than anyone else, except possibly Sony.)

(Be sure to check your ISP’s terms of service before setting up your own mail server; most US ISPs forbid public-facing servers–news, web, database, mail–unless you have a business-class account. That’s why I don’t run my own mail server–my ISP’s TOS forbid it for my level of account. Otherwise I’d set one up just to see whether I could make it work. I like crossword puzzles too.)

Still Rising Again after All These Years 0

Birds of a Feather 0

The story speaks for itself. There is nothing to add.

The Student Loan Scam Is Working Out So Very Nicely, Is It Not? 0

Welcome to the brave new old way of financing an education.

It is only those who have neither fired a shot nor heard the shrieks and groans of the wounded who cry aloud for blood, more vengeance, more desolation. War is hell. Via PoliticalProf, who reminds us

The old bumper sticker from my youth was correct. War is hazardous to humans and other living things.

Follow the link for an article as depressing as it is long.